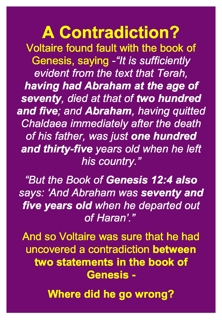 Genesis 12:4 reports how Abram responded to God’s call for him to “Get out of your country, from your kindred and from your father's house, to a land that I will show you” - “So Abram departed as the Lord had spoken to him, and Lot went with him. And Abram was seventy-five years old when he departed from Haran.”

The 18th century author Voltaire takes umbrage at this statement - in which a superficial reading seemed to reveal inconsistency with other Scripture. Regarding Abram, he writes, “we differ sixty years with respect to the time of his birth. The account, according to the registers, is as follows:

“Gen. 11:26 “And Terah lived seventy years, and begat Abraham, Nahor, and Haran... 32 And the days of Terah were two hundred and five years, and Terah died in Haran...” Voltaire continues his remarks, saying -

“It is sufficiently evident from the text that Terah, having had Abraham at the age of seventy, died at that of two hundred and five; and Abraham, having quitted Chaldaea [actually Haran] immediately after the death of his father, was just one hundred and thirty-five years old when he left his country. This is nearly the opinion of St. Stephen, in his discourse to the Jews.”

The actual words of Stephen in Acts7:4 are that Abraham “came out of the land of the Chaldeans and dwelt in Haran. And from there, when his father was dead, He moved him to this land in which you now dwell.”

So, in fact, Abram, having been born in Ur of the Chaldeans, left there to live in Haran. But of course the main point which he has correctly cited is that Abram moved out of Haran when his father was dead. And now Voltaire presents his “but” - “But the Book of Genesis 12:4 also says: ‘And Abraham was seventy and five years old when he departed out of Haran’.”

And so Voltaire has triumphantly uncovered an apparent contradiction between Genesis chapter 11 which leads to the conclusion that Abram was 135 years old when his father died - subtract the age of Terah 70 (at the birth of Abram) from the age of Terah 205 at his death results in Abram being 135 at his father’s death - which contradicts the plain statement in chapter 12 that he was 75 years old!

Having evidently researched the history of the question Voltaire notes that two prominent church scholars were at a loss how to solve this problem. So what is the Bible actually saying?

The reader might be led to think that Abram was the eldest son of Terah, but evidently the Jews understood Haran to be born first. So why would Abram be mentioned first? When we look at what occurred in Jacob’s family, the order of the first four sons was Reuben, Simeon, Levi and Judah. Reuben lost his position as “firstborn” in the family because of his behaviour - Genesis 49:4-5. His position would have passed to Simeon but he, with his brother Levi, evidently lost the possibility of replacing Reuben because of their behaviour in the incident with their sister at Shechem, when they slaughtered the Shechemites -see Genesis 34.