Trust in the Lord with all your heart

"The name of the LORD is a strong tower; The righteous run to it and are safe."

We need God as our “strong tower” that we run unto. Consider the words of Psalm 144:2-8

"My lovingkindness and my fortress, my high tower and my deliverer, my shield and the One in whom I take refuge."

Those who were eyewitnesses to the resurrection of Jesus Christ were certain of his return because of what they saw.

"For we have not followed cunningly devised fables, when we made known unto you the power and coming of our Lord Jesus Christ, but were eyewitnesses of his majesty. " 2 Peter 1:16.

This will be a time of unsurpassed turmoil, but the end result will be the establishment of the kingdom of God. So in this time of trouble let us remember the words of Psalm 46:1

"God is our refuge and strength, a very present help in trouble." 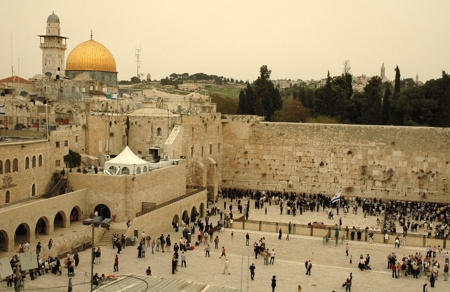 Jerusalem in the News

The move by the United States president in late 2017 to recognize Jerusalem as Israel’s capital and move the American embassy there ignited a firestorm of controversy throughout the world.

Bible readers will not be surprised by this turn of events, since Jerusalem’s status as a city of contention was long ago predicted. For example, the Old Testament prophet Zechariah predicted of the latter times, “in that day that I will make Jerusalem a very heavy stone for all peoples.” Zechariah 12:3.

Therefore, as Bible readers, we should expect the nations to be in conflict over Jerusalem. The Bible further predicts countries making war against Jerusalem in the latter days. Although this hasn’t yet taken place, we can be confident that God keeps his promises. God said, through the same prophet, “I will gather all the nations to battle against Jerusalem; the city shall be taken.” Zechariah 14:2.

This event will be a sign of the impending return of Jesus Christ, as clearly predicted in the Bible. “In that day His feet will stand on the Mount of Olives, which faces Jerusalem on the east. And the Mount of Olives shall be split in two, from east to west, making a very large valley.”  Zechariah 12:4. Therefore, Jesus will return to the same mountain from which he ascended to heaven. The apostles saw him ascend and were told that he would definitely return.

“While they watched, He was taken up, and a cloud received Him out of their sight. And while they looked steadfastly toward heaven as He went up, behold, two men stood by them in white apparel, who also said, ‘Men of Galilee, why do you stand gazing up into heaven? This same Jesus, who was taken up from you into heaven, will so come in like manner as you saw Him go into heaven.’ Then they returned to Jerusalem from the mount called Olivet.” Acts 1:10-11.

Since Jerusalem continues to be in the news, in line with what God has promised, it is up to us to be ready for the return of Jesus Christ to the earth.

Just after Jesus rose to heaven, the apostles preached on the day of Pentecost. Those who heard this said “to Peter and the rest of the apostles, ‘Men and brethren, what shall we do?’ Then Peter said to them, ‘Repent, and let every one of you be baptized in the name of Jesus Christ for the remission of sins.’” Acts 2:37-38.

The message is the same for us in these last times. "For you yourselves know perfectly that the day of the Lord so comes as a thief in the night ... therefore let us not sleep, as others do, but let us watch". 1 Thessalonians 5:2,6.